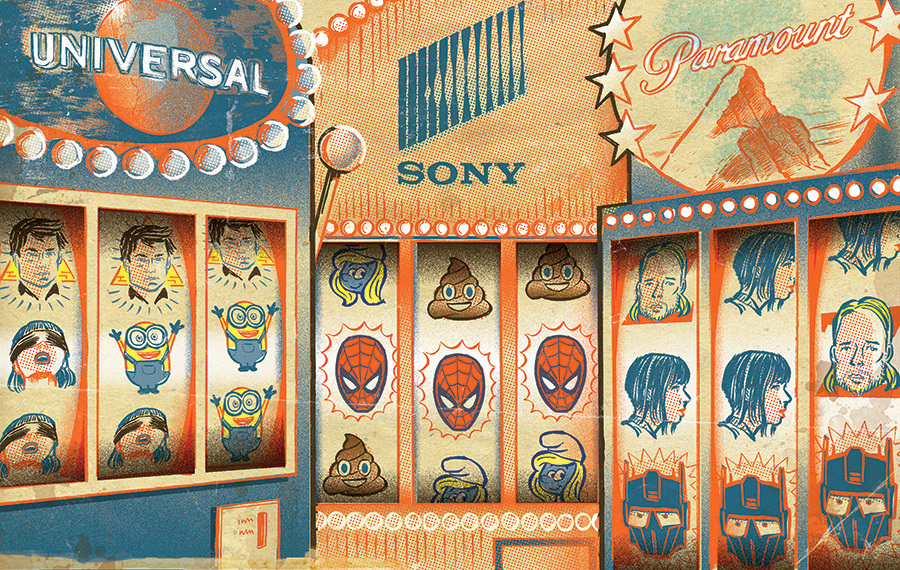 I’ve been wanting to interview Paul Hoppe for some time and it’s surprising I haven’t until now because . . . he sits right across from me every day! Paul is one of my studiomates in the Pencil Factory in Greenpoint, Brooklyn. Originally from Germany, Paul has been living and working in New York since he came for the masters program at SVA many years back. His clients have included The New York Times, The Village Voice, Simon & Schuster, IBM, and The New Yorker amongst others. Paul also does children’s books too, recently illustrating Neymar: A Soccer Dream Come True for Farrar, Straus and Giroux, which came out just a couple weeks ago. I emailed Paul some questions and he was nice enough to reply back with some thoughtful answers.

So, illustration. What made you want to pursue it?

Comics made me do it. When I discovered them at a young age, I just wanted to draw and draw and I haven’t stopped since. 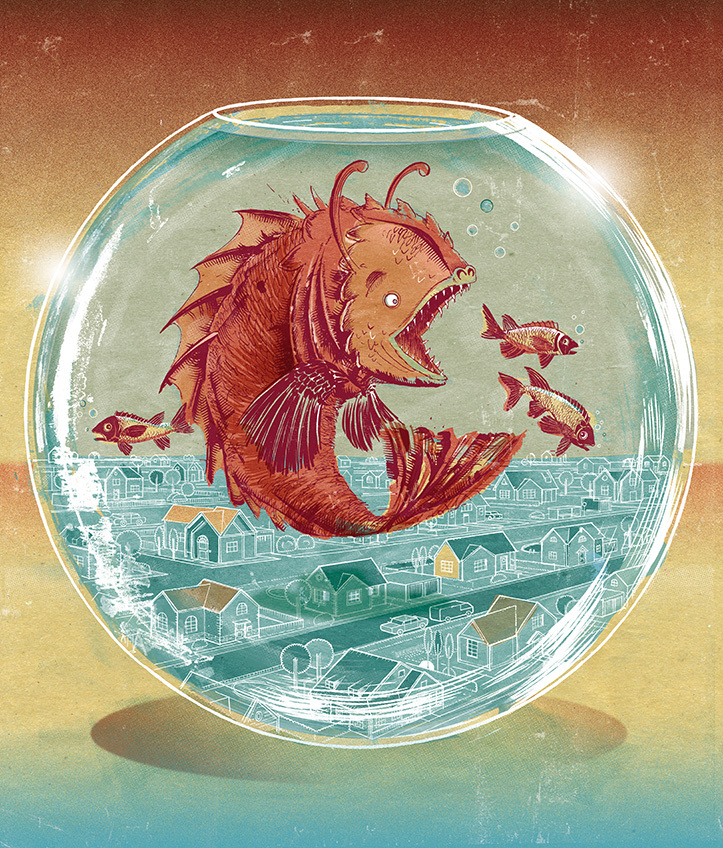 You’re originally from Germany. Can you talk about some of the ways in which illustration is different there versus here in the United States?

The US has such a strong tradition and awareness of illustration. That wasn’t the case in provincial Germany where I grew up. I studied Graphic Design with Fine Arts and, eventually, got into comics and illustrations again. The illustrators that I met were Jack of All Trades, often doing Graphic Design on the side and having multiple styles. Things have changed and evolved since then but the market is still a lot smaller than in the US, particularly when it comes to books.

What prompted your move to America?

I wanted to go back school to actually study illustration. I was getting work in Germany but I felt limited in my abilities and what kind of images I could do. And I had a couple friends and mentors who had gone to New York and I’d heard about this magical place where major newspapers would hire illustrators every day, where the comics of my childhood were drawn, a city larger than life. I wanted a piece of that.

You came through the SVA grad school—a very well-known MFA program. Did you find that helpful? In what ways did that change your art or your thought process about making art? And how do you think that helped your career, if at all?

I can honestly say it changed my life. For starters I would have not had the guts to come here without going through school. The visa requirements alone are daunting.

And it really did expand my abilities—the range of what I could express in my images—while it simultaneously helped to develop a more personal voice and approach to drawing. And being with fellow students with incredible drive and talent. They really kicked my butt to be my best and we helped each other out a lot. 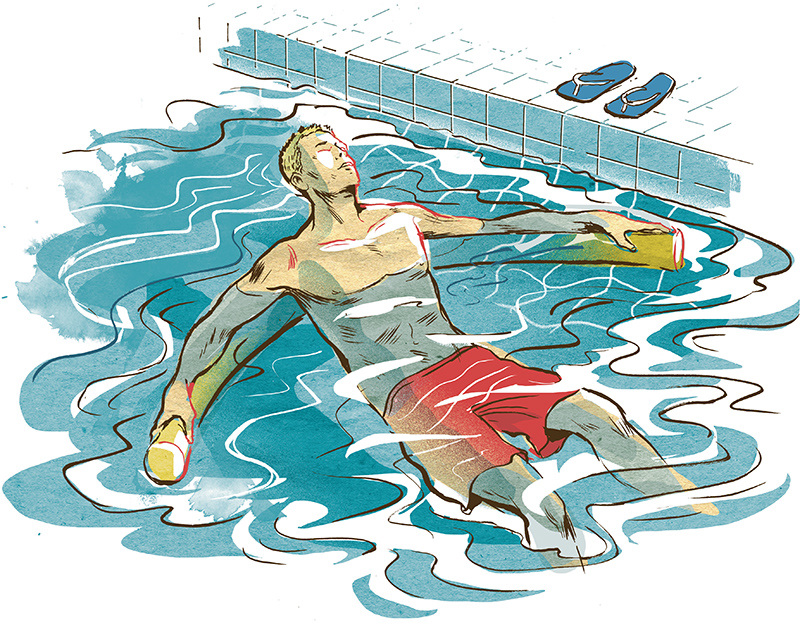 Do you remember what your first illustration job was after you graduated? And how did you get it?

My first published piece in the US was an Op-Art piece for the New York Times. The art director back then, Seven Guarnaccia, had been a guest critic in the program. I tried to stay in touch afterwards and somehow managed to get into their contacts list. When the assistant art director at the time, John Hendrix, was sending out a mass email to all their illustrators asking if we had any sketchbook reportage drawings about summer in the city, I ran off into the city and started drawing for two days, producing a dozen images. One of the pieces made it into print and it lead to other assignments.

You’ve been in the business for a while now. What’s your promotional strategy like these days? How has it changed over the years?

Switching it up every once in a while, adjusting to changes in professional practices, and coming up with new ideas are good things to keep in mind. In the beginning I met people through events and from fellow artists and I sent out a lot of postcards. Then I went more towards personal emails. Now I have an agent that actively promotes my work, though I also just did some postcards again for the first time in years. 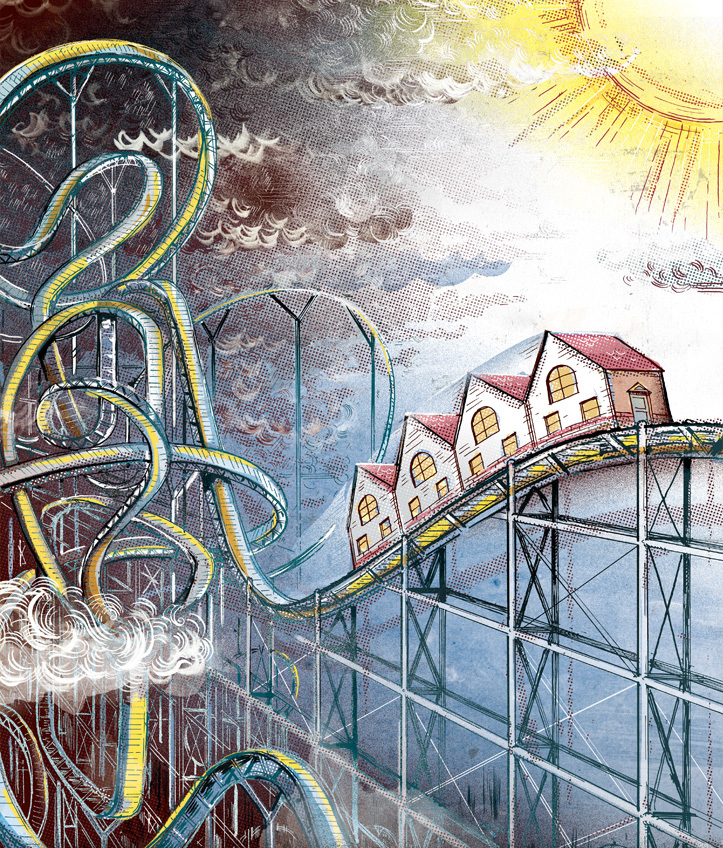 Speaking of agents, you’ve been with a couple of different ones over the course of your career. What are your thoughts about illustration reps?

With agents, it’s always about the right fit. It depends on your style, what kind of work you’re looking for, and if that works with the individual agent’s strengths. Literary agents like Writers House work best for writers and illustrators who generate a lot of book manuscripts. At some point, I realized that I need a slightly different representation, as I see myself primarily as an illustrator who also writes. So I ventured over to Shannon and Associates recently, who have a literary component but also hunt down freelance illustration jobs for their clients, which has made a real difference for me—and led to my newest picture book.

As someone who’s been involved in comics, middle grade books, and picture books, you’ve had experience with many different kinds of narrative media. Can you talk a little about how they’re unique and how you approach them? Do you have a preference? Or one that you wish you were doing more of?

All of these genres do what I like the most: telling stories with pictures (and some writing). They are related. But they also have individual characteristics and strengths. Sometimes picture books are like comic strips, but each page is a panel. They are beautiful objects with large imagery, they are pieces art themselves. With comics, you can tell more complex things, and they can be for any age. In both mediums, I try to be visual and not rely too much on the text. I do love them both, but with graphic novels I prefer the French format which tends to be shorter, and I would love to do something like that. 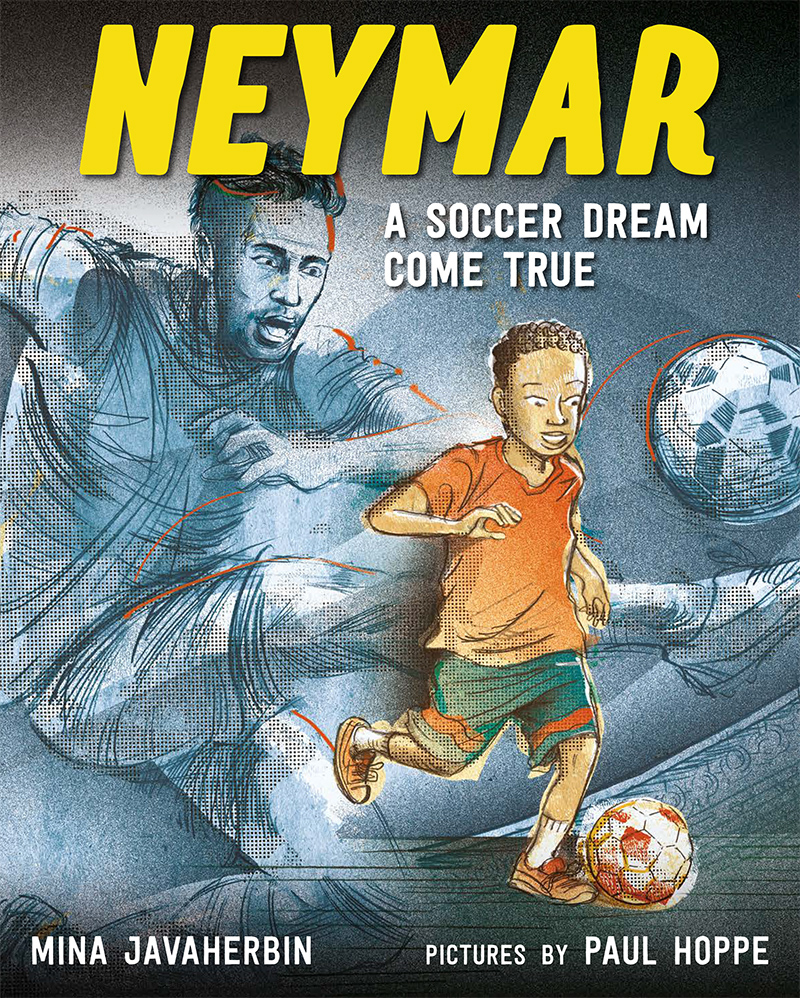 So, your brand new picture book, Neymar: A Soccer Dream Come True written by Mina Javaherbin, just got released a couple of weeks ago. It’s beautiful—particularly considering that it was on such an insane rush schedule. How did you manage to complete it so quickly and still stay sane?

It was an opportunity I had to jump on when Shannon and Associates hooked me up with it at FSG. I do love the challenge of a fast project and attempting the impossible. I worked in tight pencil and skipped the inking and worked with my terrific studio assistant, ShinYeon Moon. The most important thing was to know how much work I had to do on any given day and just to stick to it with the option of coming back to it later to refine.

Since the book is a biography, how did you tackle all the visual research for it?

A lot of googling and some material came from the author. We were lucky to find a few personal photos from his childhood. Other things I made up in the most faithful way possible, based on other materials I had, filling in the blanks with my own interpretation and imagination.

Can you talk a little, for our readers who are interested in children’s books, about the mechanics behind creating the book. What was your process like for initial thumbnails to sketches to final art? What kinds of things were you thinking about in terms of page-to-page narrative and how that also fits into the overall book? And how did you negotiate color too? I always find it hard to color one piece of art, let alone 32 pages worth, considering how it all works as a larger whole. Demystify it for us!

I always start with thumbnails. This way I see all the pages together and see their rhythm, if the compositions repeat or have a nice variety, etc. I scan those thumbnails and put them into an InDesign document so I can simulate an actual book with the type and see how the drawings stand up on their own. If I have time I also make dummies—physically turning the page is yet another way to check if it feels right.

Moving towards finish, there’s a lot of printing out and working over it and scanning again. For the coloring, I also find that difficult since they need to look good on their own and together as a whole.

I might do a couple tests but then I work on all the spreads simultaneously. That really helps to figure out the overall color scheme. I do a rough version of all the spreads and come back to them in a second round, third round, 15th round . . . till I’m happy. 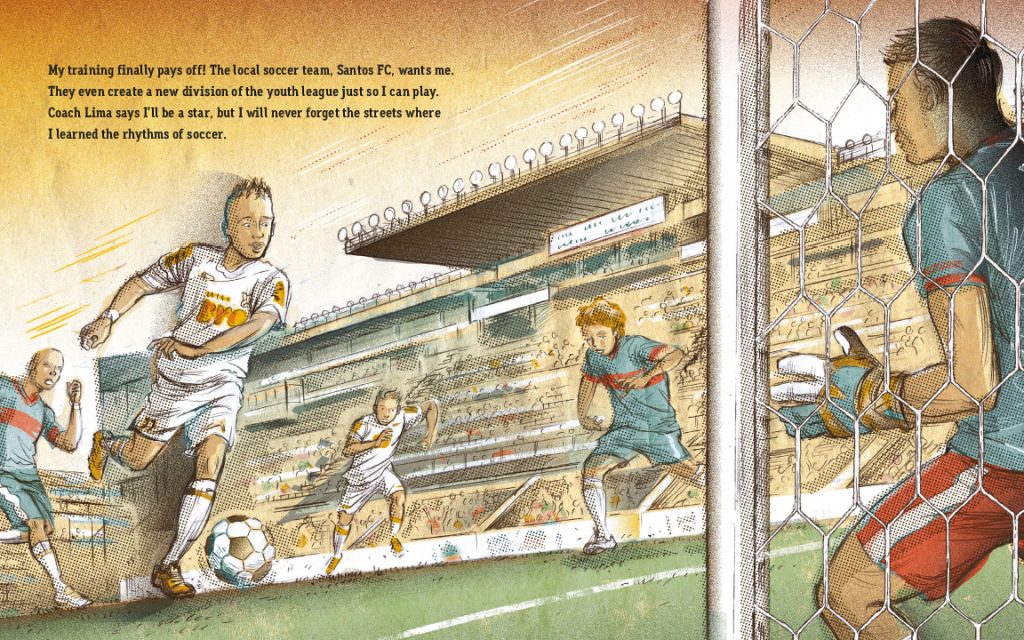 Now you’re in the promotional part of the children’s book cycle—which is a job unto itself. What kinds of things are you doing to promote the book? What about the publisher?

As freelance illustrator, it’s challenging to promote your book since the next job is already breathing down your neck!

The publishers do some standard things, like submitting to a lot of reviewers, and might help setting up a few events. But the more you can do the better. So I am going to some book stores to introduce the book, I made cards to send out, I reach out to some reviewers myself, and use my social media channels to post about it.

Plans for any future books? Anything you can discuss?

I’m working on some new picture book stories of my own which tend to veer more into the fantastical or from my own experiences. There is a familiar New York City phenomenon I’ve been trying to shape into a story. I’ve also been working with an author on a biographical graphic novel pitch. 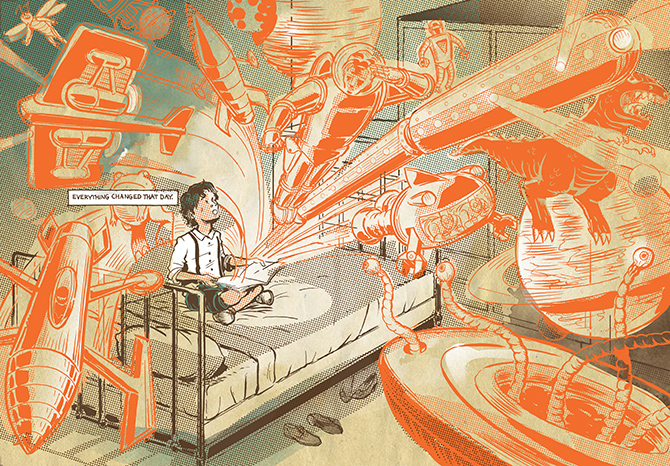 Final question: do you have any general advice for illustrators looking to get where you are now in your career? Anything you wish you’d known earlier? Any hard-won lessons?

It’s a marathon, not a sprint!

I tell people there’s no magic formula– everybody’s path is different, and it takes time, effort, professionalism, patience and persistence, a little bit of luck. I guess it is a formula after all! There you are.

Paul Hoppe’s book, Neymar: A Soccer Dream Come True, is out now and can be purchased wherever books are sold. Be sure to check out a copy! And check out more of Paul’s work at paulhoppe.com.

In the first of my new recurring interviews feature, I'm happy to welcome Kyle T. Webster.…