Photoshop has a ton of different formats to save files as—from JPEG, PNG, and GIF for web-based work to TIFF, EPS, and PDF for print. However, when I’m delivering final files to clients, for most work I use the native PSD format. Here’s why:

I work primarily on book covers and interiors. As such, I tend to provide layered files so that the art directors and designers can move things around if they need to or take elements and easily repeat them on the spine, back cover, or flaps if necessary. I do this for my own work as well when I’m the designer on my projects. But, why save as a layered PSD file instead of a layered TIFF, which many people prefer because they’re smaller? Simple: because native PSD docs aren’t actually significantly larger and are instead much more compatible, flexible, and better to work with in InDesign—which the designer will ultimately use if the work is print-based. To further explain…

There’s a myth that TIFF files are much smaller than PSD files because of their compression engine. In the past that might have been true, but in the last couple versions of Photoshop, Adobe has dramatically decreased their native file sizes to the point where the two aren’t much different. Check out the below example where one file is saved as a PSD and one is saved as a TIFF with LZW compression enabled (note: don’t save with JPG compression as that will degrade your file).

As you can see, there’s only a 3.5 MB difference in file size. When you’re sending a 90mb file, that doesn’t add up to a whole lot.

PSDs are far more compatible with other Adobe programs than any other Photoshop format. Particularly with InDesign, you can do some pretty cool things. Check this out:

If I right-click (or command-click) on a PSD file in InDesign, it allows me to select “Object Layer Options…” which will bring up this dialog box: 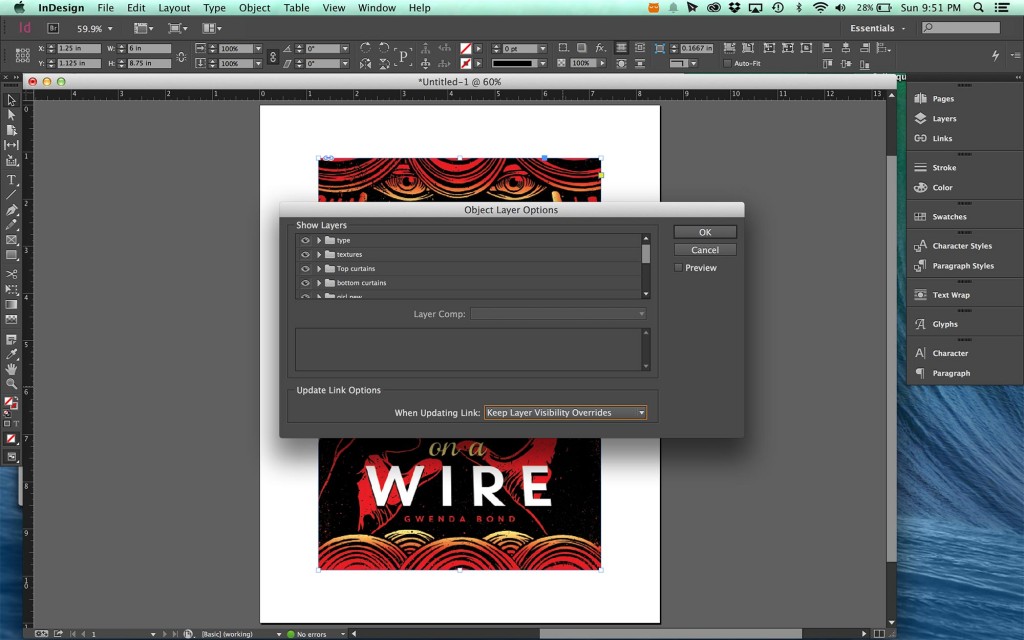 This lets me show or hide any Photoshop layer in my InDesign document. The result is I can use one Photoshop file in multiple ways by showing and hiding certain layers. For instance, say I wanted to use the exact same image somewhere else on the cover, but hide the curtain area, all I have to do is uncheck that layer and I get this: 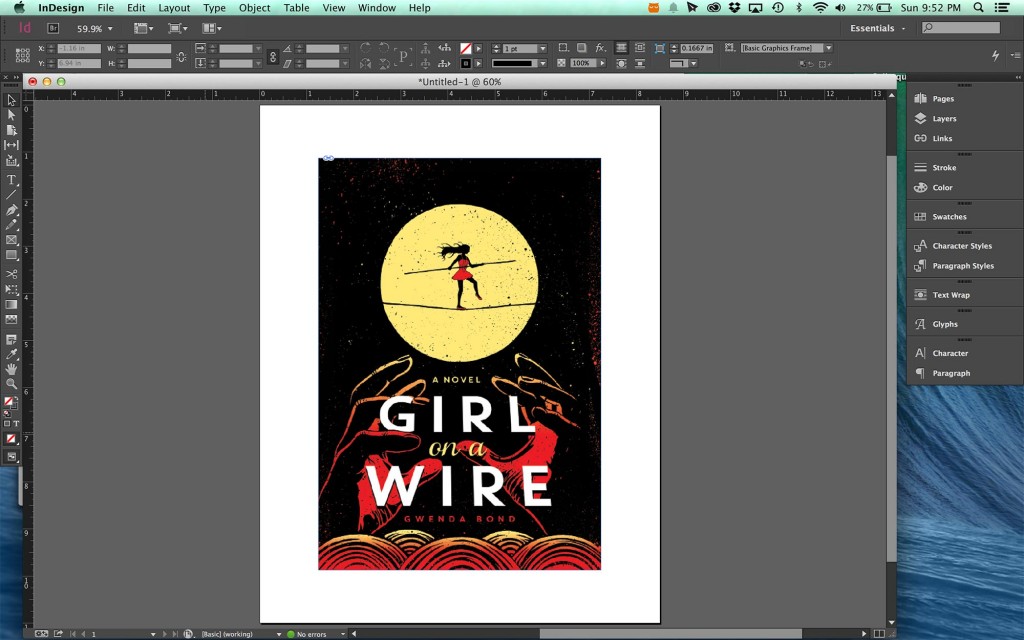 Pretty cool and useful, right? I use this all the time on my files to build complex InDesign documents. For Girl on a Wire, I used this technique extensively to complete the rest of the jacket without having to add any additional Photoshop files to construct it, other than the author photo and some branding.

However, try this on a TIFF file and you don’t even get that option! Check this image out and tell me if you see it?

Well, that’s just one of several ways in which the native PSD file is more flexible to work with than other formats and why it makes more sense to save your work as such.

So, some of you might be saying, “Why send layered files at all? Isn’t that inviting trouble for an art director to mess with your work?” Well, I would say, “Yes and no.” If it was editorial work or something similar, I would discourage that. However, with book covers, they actually request layered files (it might even be in your contract). A lot of times the designer will need to tweak certain elements—either to make room for type, make last-minute adjustments that someone has requested, or grab certain elements to be used elsewhere. The reality is that they’re going to do it with or without you, so providing layered files allows them to do it easier and with far better results. In the end, you want your work to look as good as possible and that will only help.

Lastly, I wanted to address some other file formats. While I’ve specified that PSDs are my preferred preference, that’s only for color print work. For web, obviously, I’d use a PNG, GIF, or JPG depending on circumstances, and for black and white line art without tone, I only use 1200 dpi bitmap TIFFs. (Bitmap tiffs, by the way, are amazing to work with in InDesign for some very different reasons than layered PSDs and I’ll cover that in a future posting.)

Of course, these are just my own preferences and reasons for supplying native PSD files. It’s something that works for me both as an illustrator and designer. However, other illustrators may have different opinions. If you’ve found a better reason to use other formats, let us know in the comments! It’s always good to share information!